Almost a couple of months ago I found a fabulous sofa on Craig's List. I look on Craig's List quite often and had been looking for an older sofa with wood trim. I found plenty, but they were usually too expensive or way to beat up to want to purchase. On this day in early April I logged on to Craig's List and found the set of my dreams. It had only been listed 10 minutes earlier, so I felt it was just meant to be. This beauty came with a matching chair too! Later that day and with only $340.00 spent, the set had found it's new home.
I will be reupholstering these and possibly refinishing the wood as well. I would like to change the cushion on the sofa from three separate cushions to one long cushion. They originally had tufted backs and nail head trim, so I will probably restore them to with the character they were meant to have. I'm searching for a linen fabric for the project, but haven't made any final decisions. Here are a few pictures of my Craig's List lovelies. 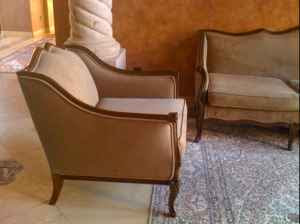 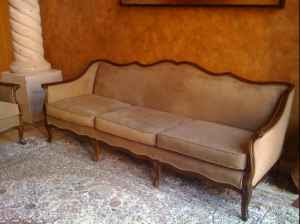